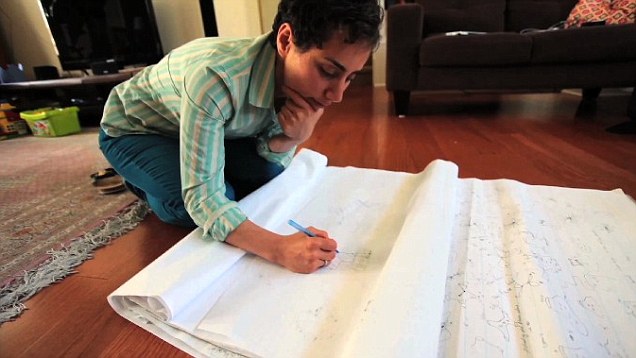 The 37-year-old Iranian mathematician Maryam Mirzakhani is the first woman ever to win the highest accolade in the field of mathematics, the Fields Medal. Since I admire her for her choice of profession and her life story, I would like to feature her in “Freedom of Choice”.

“As an 8-year-old, Maryam Mirzakhani used to tell herself stories about the exploits of a remarkable girl. Every night at bedtime, her heroine would become mayor, travel the world or fulfill some other grand destiny.

Today, Mirzakhani — a 37-year-old mathematics professor at Stanford University — still writes elaborate stories in her mind. The high ambitions haven’t changed, but the protagonists have: They are hyperbolic surfaces, moduli spaces and dynamical systems. In a way, she said, mathematics research feels like writing a novel. “There are different characters, and you are getting to know them better,” she said. “Things evolve, and then you look back at a character, and it’s completely different from your first impression” (….click here to read the complete article by Erica Klarreich)

Meet Maryam Mirzakhani in the video of the Simons Foundation:

When still a schoolgirl, she demanded from the principal of her school that she arrange for math problem-solving classes like the ones being taught at the high school for boys.

“The principal of the school was a very strong character,” Mirzakhani recalled. “If we really wanted something, she would make it happen.” The principal was undeterred by the fact that Iran’s International Mathematical Olympiad team had never fielded a girl, Mirzakhani said. “Her mindset was very positive and upbeat — that ‘you can do it, even though you’ll be the first one,’ ” Mirzakhani said. “I think that has influenced my life quite a lot.” [quoted from the article by Erica Klarreich]

We congratulate a woman who chose a remarkable path of life. Not only is she an exceptional mathematician, but also a role model for young girls and women who might want to pursue a carrier in mathematics and might need encouragement on their way.

“…Mirzakhani has learned over the years to think big. “You have to ignore low-hanging fruit, which is a little tricky,” she said. “I’m not sure if it’s the best way of doing things, actually — you’re torturing yourself along the way.” But she enjoys it, she said. “Life isn’t supposed to be easy.” [quoted from the article by Erica Klarreich]

Thank you, Maryam Mirzakhani, for being courageous in life and showing us what we can achieve.