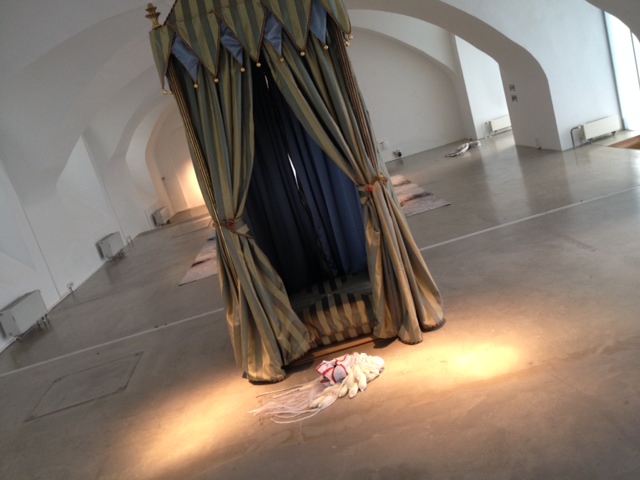 Today is the last day of AA Bronson’s beautiful exhibition “Sacre du Printemps” at the Kunstverein Graz and I would like to share my personal impression of the work presented.

AA Bronson, the curator of “Sacre du Printemps, is an artist, magazine publisher and curator whose solo artwork deals with trauma, loss, death and healing.  On the occasion of two exhibitions, in Graz and Salzburg, AA Bronson invited friends and collaborators, to join him in presenting installations, collaborative works, and ritual performances.

At the Grazer Kunstverein, Stravinsky and Nijinsky’s infamously scandalous ballet of 1913 gives name to this sequence of rites and sacrifices, overseen by sage elders, here given form in the person of AA Bronson himself. Themes of spirit, sex and darkness are knit into a labyrinth structure that takes over all the gallery spaces. (http://www.grazerkunstverein.org/en.html)

Chrysanne Stathacos’s “Rose Mirror Mandala – (twin)” first captures the viewers’ attention and introduces us to the topic of ritual.

The artwork is meant as a performance in itself: Chrysanne teared petals from roses from a local market place and reassembled them into a mandala. In a final ritual the rose petals will be gathered and returned to nature; they will be given to the river Mur in Graz to carry along thoughts and visions of visitors, and dreams and beauty to the world outside of the exhibition space.

As the artist declares on her webpage:

The Rose Mandala installations are based on historical circular structures with the intention of  creating a temporal work which changes over time.  These works are created by plucking dozens of roses apart petal by petal circling coloured mirrors range from 10 feet  to 60 feet wide.  The  viewers senses are touched by waves of rose scents inhabiting  the space of the work.  The mandalas are left to dry as the  petals are reduces to a quarter of their original size. At the end,  the mandala is dismantled in a final performance. The Rose Mandalas have been  swept up, gathered and thrown to the winds or blown away by human in breath by myself and the audience. These installation / performances reflect the ephemeral process of change, age, decay and emptiness. http://chrysannestathacos.com/the-roses/

Figure 3 and movie: Igshaan Adams invites the visitors to listen to his chant inside a labyrinth of veils. 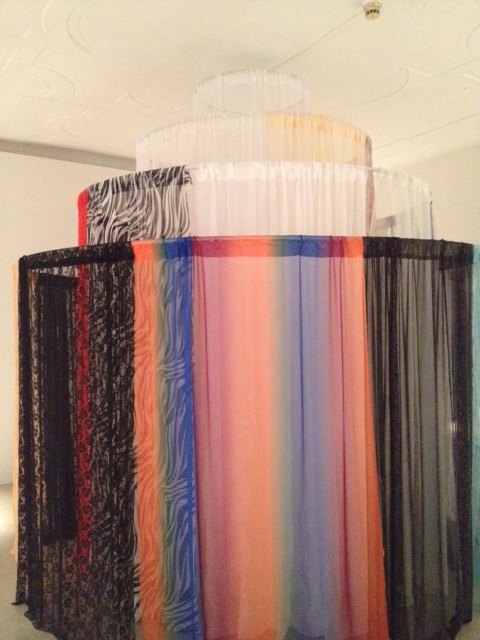 Everybody may enter. In case the artist is absent you might want to sing your own personal song.

The opulent tent depicted in the featured image and underneath served Michael Dudeck for his chanting performance with a landlocked fish.

Michael Dudeck is an artist, witchdoctor, and cultural engineer. For the past decade his work has explored queer shamanism, religion and artificial institutions through performance, video, installation, writing, drawing, sculpture and sound.

Figure 4: Mask used for the performance of Michael Dudeck’s Fish M/Other (Ape Witch), the third and final iteration of the Fish Cycle.

There is much more to be seen at the exhibition space. Today is the last chance to experience the space, the rites and the artwork.  I would recommend everybody who is in the area to visit, since I had a wonderful experience.

All images including the featured image ©Barbara Lüneburg