Following a month of featuring mainly art by women, in April I would like to introduce you to some works of male artists. I will start with ‘Suicidal Self Portraits’, a multimedia work by composer Marko Ciciliani, that deals with the shaping of persons’ identities and personalities.

What is ‘Suicidal Self Portraits’?

‘Suicidal Self Portraits’ is a cycle of five loosely connected works, that explore fetishisations resulting in some sort of re-start of a person’s life–be it through revelations of inner truths, indulgences in obsessions or remodeling a body through plastic surgery. The reference to “suicide” in the title is to be understood as the re-invention and reincarnation of a person to a new identity. 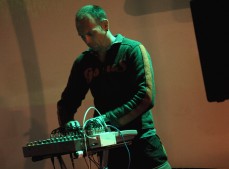 The actions and confessions of people that Ciciliani portraits in his compositions are encouraged by the anonymity of the internet and are mirrored in different kinds of media. Ciciliani introduces us to what human beings do with the media and what the media do with them.

The car commercial shown in this post is the preludium of the ‘Suicidal Self Portraits’ and leads to
‘Crash’ for a singing percussionist, 2007 (a piece on intensive sexual arousal that hinges on staging traffic accidents).
‘Going to Hell’ for voice/e-violin, percussion and electronics 2009 (about public confessions and the revelation of intimaties of one’s life in talkshows etc)
‘All of Yesterday’s Parties’ for voice, electric guitar and electronics, 2010 (exploring the range of the song “Yesterday” sung in an intimate moment of radical change in an individuals life while being the most often covered song ever)
‘Screaming my Simian Line’, 2010 (on palm reading and the affinity to evil in the esoteric realm)
and ‘LipsEarsAssNoseBoobs (Gloomy Sunday)‘ (2014) for voice/e-violin, percussion and electronics (on remodeling through plastic surgery).

“Suicidal Self Portraits”, will be performed on 6th of April 2014, 20 hrs, at Deutschlandfunk, Kammermusiksaal, Raderberggürtel 40, 50968 Köln, Germany.